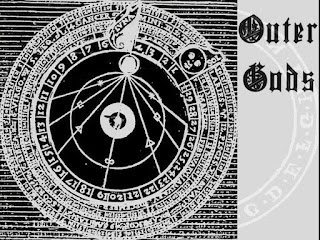 1. Can you give us an update on what has been going on with the band
since the new album has came out?

The Wrathe: Currently, we are working on a follow up album and a
couple split releases, while making a few live appearances. We're also
in the process of embarking upon a couple soundtrack projects.


2. Recently Domestic Genocide put out your full length album, can you
tell us a little bit about the musical sound on the album and how you
feel you have progressed since the last 2 eps?

The Wrathe: Our Light Dims Eternal album is a style progression from
our EPs. Our first, "The Mountains Den demo" is in some ways a
straight drone record, while "Mael Medusa" is certainly a darker, more
unique atmospheric production. I've just re-listened to our first two
EPs because we've just gotten them remastered, so it's interesting to
look back at where we've been. The full length album pushes the
atmospheric, black production further, crafting a sound palette of
"epic claustrophobia."


3. What are some of the themes and concepts the band brings out with
the newer music?

The Flail: The music is an attempt at dialogue with that which is in
occultation, allowing it to speak where language fails to.
The Wrathe: The new album is actually about the inevitability of decay
and the power of ritual amidst that decay, and the production is meant
to translate this dark descent.


4. What is the meaning and inspiration behind the name Outer Gods?

The Flail: Behind the veil exists the realm of madness.
The Wrathe: The name is a Lovecraft reference, but really the
significance spoke to us both intensely. The idea of being exiled to
the stars, disconnected and at rest, only to awaken for purposes
beyond the understand of humanity in general is fascinating.


5. Currently there is only 2 members in the band, are you planning on
expanding the line up in the future or do you choose to remain a duo?

The Wrathe: There may be other artists involved at some point in
collaboration, but ours will always be the inner circle. Outer Gods is
at the core the dichotomy of the Wrathe and the Flail, the esoteric
and the flagellant.


6. How would you describe your views on Occultism, and what forms of
the occult do you find interesting?

The Flail: Occultism is a slippery term. I have little interest in the
sort of pseudo new age idea of the occult that many people understand.
I’ve never had interest in reactionary movements or ones who base
themselves on a naïve attempt to reclaim a sort of master morality.
The transcendence that is sought after is something that is beyond
conception and reckoning, it’s an attempt at dialogue with the unknown
for a greater understanding. The early occultists of antiquity and the
medieval were great scholars, and that drive for knowledge and the
experience of essence pulls the music forward as well. There is also a
drive towards ritual, as the human animal is the ritualistic one with
gods and symbols and civilization.  The sounds are an attempt to echo
a timeless drive of the man that stretches from the first day fire
sparked in caves as paint adorned the wall and into the unknown
future. Who dares to walk such a path?


7. Your music covers a lot of genres from black,noise and doom, do you
feel this gives you a great advantage at being original?

The Wrathe: I suppose on some level this is true... Outer Gods is
meant to be an avant garde project, which gives us plenty of sonic
space to work with.
The Flail: We make the music that we feel compelled to make; there
isn’t a conscious drive to make the music more or less original,
sounds and dynamics are part of the arsenal available to us. Our aim
is to make music that we find to be first and foremost authentic to
ourselves, that we enjoy and can take pride in. This is how we
approach the music we make.


8. On a worldwide level how has the feedback been to your new album by
fans of underground music?

The Wrathe: So far, people seem to think the record is good... if not,
at least a little odd.


9. What direction do you see your music heading into on future releases?

The Wrathe: I see us maturing our production style while exploring the
new ways to create dark, cinematic, and meaningful music/art.
The Flail: Each song or release we approach with a fairly blank
canvas. We will start with something that we like, whether it’s a
sample, something on synth or guitar, or anything really and build
slowly upon it until it is finished. I can’t speak as to what
directions things will or won’t go, as it is more about allowing the
aether to flow through and carry the sound where it may. Our music
comes from the haze of prophets and wandering madmen.


10.What are some bands or musical styles that have influenced your
newer music and also what are you listening to nowadays?

The Flail: As of late, Takahashi Chikuzan, Ustad Bundu Khan, Earth 2,
Götterdämmerung, Bastard Noise, Frank McPeake & Son, The Well Tuned
Piano.
The Wrathe: The 90s black metal scene is an important influence, but
really it is the odd black metal related projects like Abruptum and
Aghast that loom large. The avant garde/industrial influence on this
band is pretty strong, it manifests itself in different ways. This
year, I've been listening to the new Lustmord and Locrian albums quite
a bit, they're both fantastic.


11.Outside of music what are some of your interests?


12.Any final words or thoughts before we wrap up this interview?

The Wrathe: Many thanks for your interest in our music.