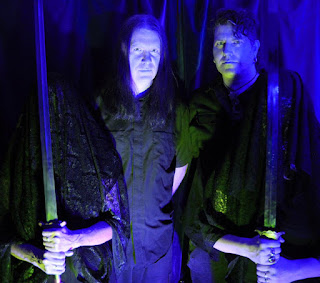 1. Can you give us an update on what has been going on with the band since the recording of the new album?

We reached a point where we stopped playing live shows due to some of the members being too busy with other things to further contribute, which, although unfortunate, has also given us the time to work on new material and restructure things for the next venture. We are shifting gears to continue for the most creative and positive outcome for next year. Touring Europe is on our radar next, and a new recording.

2. You have a new album coming out before the end of November, musically how does it differ from the stuff you have released in the past?

The Destructive Cycle is a concept album, designed to have a certain effect when all the songs are played in the proper order. It has been written as a sort of musical spell. The results of which I can't actually reveal as it may compromise the effects of its charge. Musically its our most technically composed album. I think it stands apart from the other records in the totality of its overall theme.

3. This is also your first album to be released since 2015, can you tell us a little bit more about what has been going on during that time span?

I spent a straight year writing and composing these songs with our drummer Patrick. He lives in Portland Oregon so it was kind of a long distance thing. We crammed for entire weekends at a time, so we were very prepared when we got together to write. He's a very competent and solid thrash/grind drummer, so the songs for this album were written with his style of playing in mind. We tracked and mixed the album ourselves for a full year also, taking our time, as is usually not the case when you are in a studio paying an engineer and staying on budget. Our keyboardist Brandon Fitzsimons did all the production and we are very pleased that we took our time as the results more than lived up to our expectations.

4. The lyrics on the new album deal with the Taoist five element theory, can you tell us a little bit more about your interest in eastern esoteric religions and cultures?

I have been studying chinese martial arts since the early 90s, and in 2005 was certified as an instructor of Wing Chun Do Gung Fu. After that I became involved in the Taoist Wudang internal styles, specializing in sword. Five element theory bleeds into the techniques of sword and XingYi which the former i have studied for 10 years, and the latter for many. The creative and destructive cycles are part of the forms of these arts. In 2010 I traveled to the Wudang Mountains in China with a Taoist priest as my guide and teacher. The spiritual and electromagnetic energy there is overwhelmingly strong and made a huge impact on me. I relate to this way of understanding the world and cosmos very intimately, and am a firm believer in its power.

5. You have also covered lyrics deal with western occultism on previous releases, can you tell us a little bit more about how your interest in this topic has evolved over the years?

I have always been a solitary practitioner and have never been a follower of any one lineage or stylistic practice. Looking at my evolution of influence, it is probably closest to Chaos Magick but with a strong emphasis on the internal martial arts as a catalyst for generating creative power. Over the last few years I have worked with a very talented teacher of hermetic alchemy. The more I study the different arts, the more I discover about my true self, and this reinforces my belief that the only true practice is the one you make your own. As alchemy states, 'Know Thyself'. I am still and will always be on the path to self knowledge.

6. You have also shown an interest in Italian horror movies, what are some of the films that have had the biggest influence on your music?

Definitely Dario Argento's Suspiria and Inferno were a big influence, especially in the old days of the writing of the Witch Metal demos. His interpretation of the fates as witches was a driving force for me at that point. Really any film that had a strong soundtrack and was part of the Giallo imagery has always been influencial. Both Goblin and the soundtracks of Fabio Frizzi have been very motivational.

7. What is the meaning and inspiration behind the name 'Black Queen'?

The name is inspired by a character from Dario Argento's Suspiria. The black Queen is what the initiated members of the coven refer to the coven head as. One who has become a master of her own magick. Black Queen can also be thought of as a reference to the destructive power of nature, which most humans seems to view with fear and misunderstanding. Most natural disasters are treated as tragedies by humanity due to the loss of human life, when in all honestly it is part of the natural cycle of the planet and cosmos, and very necessary for growth and progress. The powerful fearful psychological energy created by the human ego as a result of these events is like a massive destructive entity that cannot be reckoned with. This also is the black queen.

8. Can you also tell us a little bit more about the artwork that is presented on the new album cover?

We contracted Jef Whitehead for the painting of the cover as we have a very high degree of respect for his artistic vision and originality both visually and in his musical endeavors. I sent him a string of photos of movements from the Wudang sword and whisk form for inspiration. Other than being used as a weapon, the taoist whisk is used for banishing malevolent energy. The being wielding these in the painting represents the destructive power of the universe in female form (mother nature), who is creating a swirling circle with the weapons as energy is emitted from a black triangle representing the void. We couldn't be happier with his interpretation of the album's concept. It fits the music perfectly.

9. What are some of the best shows that the band has played over the years and also how would you describe your stage performance?

The one that really stands out was playing Housecore Horror Film Fest in Austin Texas. We got to pretty much open the festival and also playing were Goblin, Eyehategod, Repulsion, The Melvins, lots of amazing performances and horror films screened. We also each ate our weight in tacos. I really have loved all the shows we have played but it's always more fun to play in a town that is not where you are from. People just seem to react more responsively and get into it more. As for stage performance, everyone in this band is able to lose control live, it's not one of those bands where people just stand there and play the songs in a controlled way. When you are really having fun on stage, the crowd will pick up on it and respond. The way i see it everyone is there together, it's not just that the band is playing and everyone is watching, it's everyones energy together that makes a good show, not just that band's.

10. Do you have any touring or show plans once the new album is released?

Not at this point. We plan on going straight into writing new material and working on some video first. We would like to have something brand new to play the next time we play out.

11. The new album is going to be released thought both 'Roman Numeral Records' and 'Super Sargasso', can you tell us a little bit more about both of these labels?

Super Sargasso is a label out of Lima, Peru and we worked with them on the release of The Directress. A small label but very great to work with and we are very happy to have representation in South America, where people take their metal very seriously. Roman Numeral is run by Paul Pavlovich, who i played with in Assuck, and has also remained a very close friend since those days. He is releasing the vinyl and doing the design on it. All of his releases have a very high bar for the visual artistic integrity of the release. He really makes everything he puts out something very special to hold in your hands and behold. Everyone should really check out the releases from both these labels, its all really great stuff.

12. On a worldwide level how has the reaction been to your music by fans of black and extreme metal?

Pretty good. Some people get it, some do not. We have always never really gave a fuck about what is currently going on and what is popular, we just create our art the way we want to. It seems like some people really want your music to fit into a genre, like it's death metal, or it's black metal or doom or whatever. We really have never cared for that mentality as we see it as very limiting. You might have a very black metal band that has people wearing cloaks and lots of candles and burning sage and all that, but is the music coming straight from their soul and their pain and experience in life? Or is it just mimicry for the sake of fitting into some lifestyle or fashion? We don't try to fit into these moulds, and we hope that our music reaches people, but we just do what we do without the outside influence of trends. It's the subtleties of our music that i feel make it unique, and many people have been able to tap into that.

13. Where do you see the band heading into musically during the future?

Well things are going to get a lot more into the soundtrack realm for the next release, it's something we have always wanted to do. It will still be metal, just more theme driven instead of being focused on extremity and thrash. All the same signature traits will still be there.

14. What are some of the bands or musical styles that have had an influence on your newer music and also what are you listening to nowadays?

As influences that are older there is Celtic Frost's To Megatherion, C.O.C.'s Animosity and Septic Death as well as things like Goblin, Fabio Frizzi and Ennio Morricone soundtracks. Recently been listening to Oranssi Pazuzu and Leviathan's Scar Sighted, as well as the Nasa Voyager recordings which isn't really music, but its unique because it wasn't recorded on earth. I listen to my share of field recordings and experimental music of all kinds too, and some traditional balkan music also. Ved Buens Ende and Ulver have always been a big influence for me also. I love their music.

15. Before we wrap up this interview, do you have any final words or thoughts?

Don't let the monkey brain get in the way. As Bruce Lee said, "Don't think, feel!". Thank you for your time.